A downloadable game for Windows

It's A.D. 21XX. Set after the Repliforce War from Mega Man X4. The Repliforce was wrongly accused of being Mavericks during the incident, the public doesn't trust the Maverick Hunters anymore and demand for change. In the midst of it all, a new threat appears that causes Reploids to act erratically. Are these Reploids truly cyber-rebels or just victims of a bigger plot? Help the blue Reploid hero Mega Man X discover the truth of the Innocent Impulse incident!

This project is not endorsed by nor affiliated with Capcom in any way. All Mega Man / Rockman material including but not limited to game, characters, images, names, and music are © Capcom Co., Ltd. No copyright infringements are intended, this is a project purely intended as an unofficial fan project to show our love and appreciation for the franchise.

Excellent fangame! I've gone through it several times now and shown it to my friends. Hard to believe it's THIS polished despite being in Version 0.1. Really looking forward to playing V0.2 whenever it releases, and I wish you the best of luck on the project!

Side-note: I can see where the other commenters are coming from, but personally, I had a ton of fun playing Spark Mandrill's stage on both Normal and Xtreme as both characters. I didn't find it too punishing or hard at all, but if you decide to change the game to be more forgiving, I'd be perfectly OK with that. Personally, the only nitpick I have (putting aside the stuff like the controls not being saved) is that Zero's saber can absolutely delete Mandrill's health bar. Each strike ignores invincibility frames, unlike X's pellets, so on Normal mode especially, the boss fight seemed easier with the Z-Saber. Minor gripe, though! Definitely keeping a close eye on this game!

I mean, a challenge is good and all but aside from wall jumping the ladder there is no way to climb to the top without getting hit by the electrical balls in Extreme (don't remember if its an issue in normal or not) just because of how rapid they are. Its quite literally impossible due to the time it takes for the climbing animation at the top to finish. That's not a challenge, that's just cheap.

Same goes for Spark Mandril's ground pound lightning attack which has 0 windup and happens instantaneously where as literally every single other move of his has at least some kind of telegraph to react to. Everything else, sure, that's fine, but those two points come off as cheap hits as opposed to challenge.

I personally didn't have an issue with the electrical balls, aside from taking the lower route (with the 1UP and Health) where you can sometimes jump into one without seeing it since the camera doesn't pan down before you jump there, but I see where you're coming from.

Mandrill's ground pound works like that in X1 iirc, so I also didn't have an issue with it, but you're probably right that it needs a longer telegraph.

Not sure if I need to say this, but my previous comment wasn't meant as an attack on you or any of the commenters who found the level too punishing! Like I said, I'd be happy with changes to make the game more fair or forgiving. Hope you enjoy V0.2!

Oh goodness no! I didn't read it as an attack, more so I was meaning to counter argue your points not attack you in any way!!! Sorry as well if my counter argument came off as rude/hostile as that was not the intention at all haha.

The game is exceptionally well done, the characters (both X and Zero) feel great to use and are very snappy and responsive.

However, I do have to agree with others in that a lot of things in the Spark Mandril stage feel overly punishing, including one of Spark Mandrill's attacks.

Enemies and projectiles just move way too fast in the stage to the point that I have to wonder if, on expert, it's even possible in the first section of the stage to climb the ladder without getting hit by the ground electricity. The delay in getting to the top and playing the end of the ladder animation until you regain control of your character makes it feel like it is quite literally impossible to not get hit there.

Hotarion and Turn Cannon Projectiles specifically. I know in the original MMX Hotarion were also pretty good at getting surprise/fast hits in but they feel just a tiny bit overtuned and same goes with the Turn Cannon Projectiles speed. Aside from that the enemy placement and layout feels great and all the other enemies feel pretty fairly balanced all things considered.

Spark Mandrill as a fight is absolutely AMAZING, all of his attacks have great telegraphs that give plenty of time to dodge... except one. The lack of any warning, any wind up, for striking the ground with electricity sucks. More so on Zero but even with X it really sucks. Every other move it feels like its my own fault if I get hit but that one more feels like a cheap shot every time. Maybe adding even a short windup animation where he lifts up his fist before slamming the ground would make it seem much more fair.

The last negative I can think of in this beautiful and finely crafted game is the leg parts. Specifically the fact that I feel like I am weakening X by getting them to a degree. Baseline X has his Airdash and Hover in this game, which is kinda cool to see. However if you decide to get the leg capsule, which by the way has a VERY cool mechanic for defensive/quick reaction play, you lose the air hover which... really feels bad. I feel like losing abilities by getting an upgrade in general feels bad. It puts me, as a player, in a hard position of "Should I or should I not"

Using the Debug Menu to get the full armor set is also very cool! I love the way this game, and other fan games, are handling the Hadouken and the First Armor Charged Shot is so well done in this game!!! Visually impressive and feels great to use. The special Jump feels a bit too dangerous to use without giving any iFrames post usage but aside from that the armor feels great even if its not intended for access at the moment haha.

It's also frustrating that settings, such as controls and screen size, reset every time the game is closed. I tried both versions of 0.1 but neither seem to remember any settings after closing.

All in all, and I know this post focused on the negatives but honestly this is one of the most hype Mega Man X fangames in my book. The choice in art style, the tight controls, the dialogue, everything has been superb and exceptionally polished and an absolute treat to play.

I know version 0.2 is coming out soon, who knows maybe what complaints I had are already changed, and I can not wait to play it! This fangame is a MUST PLAY in my books!

Yo! Thanks for the very in-depth review. What you've mentioned are all very valid points, and we'll be trying to adjust things around so they feel more fair to the player. Some of them are already fixed by 0.2 as you thought, like the Hovering being missing when getting the First Armor Leg Parts, and the controller settings not being saved when restarting the game, just to name some.

Thank you for the very constructive criticism!

You are most welcome and thank you for all the hard work on this amazing fan game! Can't wait to play 0.2!!!

super fun so far, but spark mandrill's stage is suuuuper frustrating. nice change of pace from the overused chill penguin in X fangame demos though, i will say

We actually WERE going to use Chill Penguin instead, but precisely because other fangames do it a lot it was probably better to do another stage. Glad to see it paid off!

Really looking forward to this. I can't emphasize enough how much I love the not quite 16 bit aesthetics lend the game a really unique vibe.

Thank you! It was really hard to get the right balance of colors so it still "felt" 8 bit but with a few extra boosts.

I want to do a video on this game for my YouTube channel should I wait for 0.2?

0.2 will drop in the coming weeks, so if I were you I'd probably wait until then? We're getting very close.

Sounds good to me. Just really excited to play it, but I want to go through it blind to give it a review. It looks fantastic.

i just played v0.1. i like it. it's pretty hard for me though lol. i tried to defeat mandrill but couldn't. i still haven't explore other gates though. i love it. keep up the good work!

p.s. i'm using xbox controller to play this game. it seems that the up and down on the left stick doesn't work. (d-pad is fine)

great! i'm looking forward to it!

The single executable is what it sounds like, a single .exe file that can run the game without any extra files. Though in the future we might apt for a different way to download the game.

Is Zero going to be in the game?

He will, but he won't be playable at first.

OMG, THANK CHRIST!!!! at least it gives me pause dat he's going to be there

thank you for your time, keep up the good work!!!! 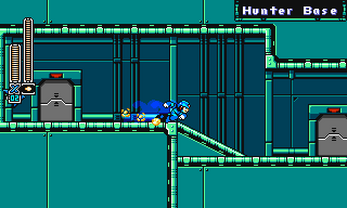 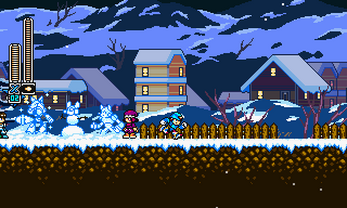 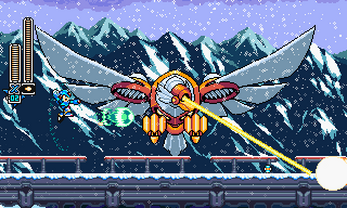 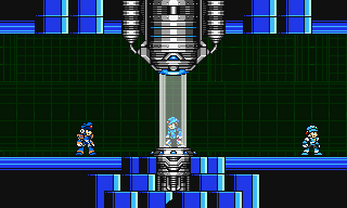 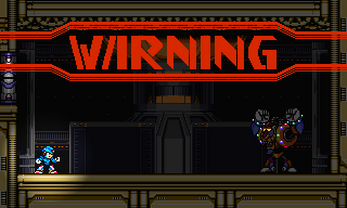